Mark has repeated his success in last year’s Calverley Cup and beat Barney Lewis +18 in the delayed due to injury semi-final and then Richard Mann in a very close final +2.

Hazel died recently after a short illness at the age of 87. She was a long-time member of the club and was a very generous backer, having donated the whole cost of the club house when we moved to Calverley Grounds in 1995. She was made a Life Member in 2004. She enjoyed playing very much and was sad to have given up playing.

A mostly grey and slightly windy day, leavened by the occasional sight of the sun, allowed a full days play. One final had been postponed, the Calverley Cup, due to the enforced absence of Richard Mann at the CA’s All England Regional Final, but we ran out of time for another one – the Golf Hunter Plate. So these will be played at a late date.

We had a good sprinkling of spectators watching the play, and some of them even complimented the players on their skill!

Kate Sander provided the lunch and also managed to win her final comfortably. The only really close match was the Golf Doubles which went to the final hoop of the third game and although Barbara Tasker was first to play and placed her ball just in front of the hoop, Jon Diamond cleared it from 13 yards and after a bit of toing and froing Lister Fielding clinched the match.

Congratulations to all the winners! 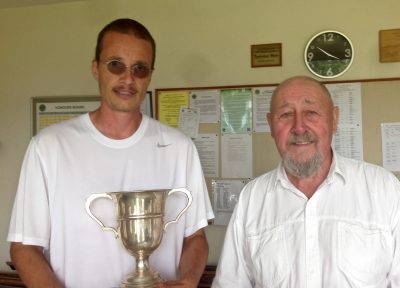 Our Advanced tournament was conclusively won by Luc Berthouze with a clean sheet of 6 wins on lawns we thought were fast, but which most of the visitors thought were slow, especially some bits on lawn 3! Due to a last-minute injury-driven withdrawal, the field was reduced to eleven, and played a flexible Swiss aiming for a minimum of five games each.

Rising star was highest-handicap Chris Coull from Sussex County whose only loss in five games was by “minus 1 on time” and whose performance earned him a merited reduction from 9 (bandit!) to 8 – we will hear much more of Chris in the future. Woking’s Andrew Dutton also had a 4/5 record, losing only to the winner and posting the only successful TP of the weekend.

Ending our season in this league with 1 win, 1 loss and two draws due to bad weather…

A slightly disappointing entry of 5 this year for this AC event run by John Greenwood in his first outing as Manager, but definitely better than the last few when it didn’t run! Anyway John Moore ran out the winner, with George Bolland as runner-up.

Ending our season in this league with 2 wins and two losses.

Only 8 players entered our AC Handicap event, but luckily the poor weather for the last few years did not repeat. The lawns were quite fast by TW standards, but there a complaint about how slow they are from our Hurlingham participant!

John Hobbs, the Manager, managed to organise the draw so that the winners of 4 games played in the last round, with Jon running out the winner by just 4, after looking like he was well lost.

A total of 22 teams from 15 clubs took part, with a mixture of Singles and Doubles. The handicaps of all the players was gratifying high, with no-one below 1 and only 14 out of 94 below a handicap of 5.

The Singles event was won by Dulwich 1 on a very close tie-break and the Doubles by Sussex 1.

After much email discussion of the possible formats,  Barney spoke and we played 2.5 hour 18-point games, with net points in the tie as decider, if needed!

Barney also started on form, nilling Alex in the first round but then going down to John while Richard got his second win.  In the final round, Richard prevailed over Barney by 3 on time, this being the only game that went anywhere near the contentious limit, while Alex broke his duck.

So Richard will represent us at the Surbiton semi-final, with Barney as reserve.

Kate and Michael Sander hosted a very successful summer barbeque, despite Michael being a BBQ novice. 20 people enjoyed the food and the weather and even played a few games of petanque!

Despite the weather forecast very little rain dampened our team in this annual SECF GC tournament.

Day 1 gave us a good start and our team of Jon Diamond, John Greenwood, John Hobbs and Derek Crocombe won 5 of our 7 matches, beating previous winners Dulwich, losing to Canterbury and more understandably to Ramsgate.

Unfortunately having run at least one hoop from the boundary Derek was unable to play on the Sunday and, although Mick Greagsby is a good replacement, we weren’t able to sustain our performance and only won one of our 6 games, leaving us 7th out of the 10 teams, the same as last year. Our results were:

Despite the rather changeable weather we had a steady flow of visitors –  from France, Holland, Australia as well as several who were local from Frant, Tunbridge Wells and Penshurst all of whom signed the visitors book so we have some contacts to follow up.  All the local visitors were given our membership leaflet and the Golf and Association leaflets.

Everybody managed to complete at least 5 rounds, but Richard was a clear winner by winning all 6 of the games he played!

On Sunday the 5th of June 2016, we woke up to a beautiful day with a clear sky and the sun shining brightly! Just right for croquet on our beautiful lawns in the centre of Tunbridge Wells! And at the Royal Tunbridge Wells Croquet Club, volunteers started arriving from 9 am and quickly put out the hoops, banners, flag, notices and anything else we could find likely to attract the public eye. And – just after the start time of 10 am – our first visitors arrived. And the steady flow continued.

By 1 pm we had had 30 visitors and more followed in the afternoon. All the pre-event publicity efforts over the past 3 months were paying off. Curiously the visitors didn’t want to try to win prizes by hitting the centre post, or partake of our delicious free refreshments – they just wanted to learn and play croquet! Great! All our volunteers were kept very busy and at least 6 games were concurrently under way at all times.

Clearly the next month or so will tell us how many new members we will have as a result of this National Croquet Day event (Ray Stone signed up on the day) but the email comment at the end of the day from one of our Committee members nicely encapsulated the event – “Wasn’t today a great advertisement for the club and for croquet in general”. Hear hear!

Due to Mick being unable to play on Finals Day 2015 the final for this event took place between Jon Diamond and Mick Belcham took place today and the spectator was much appreciative. Jon won +16 in a very quick game, so obviously not too many mistakes made for a change… 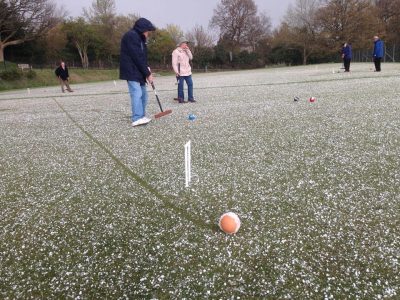 After a slight delay of a week this year’s event started, but in some terrible snowy/hailey weather… 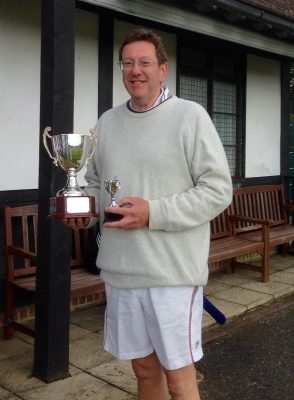 On probably the soggiest set of lawns we have ever provided for a tournament, twelve of the County’s finest squelched their way through five games of Advanced croquet, leading to a win for our regular London visitor, Kent-born Brian Havill, bringing to an end to several years of Medway domination.

Managed ably by Alex Jardine the main event was the knockout for the Cup and for this we really needed an even number of players. Following the withdrawal of veteran Colin Prichard (broken wrist), a late press-ganging by the hoop-setter and the Chairman on the day before persuaded Mike Greagsby to fill the gap and he proved to be Tunbridge Well’s most successful player by a distance.

Playing with impressive accuracy, Mike accounted for Alex by 3 points in the first round and the multiple-times-winner Robert Alexander by an impressive 14 in the second. Trevor Longman from Ramsgate beat Jon Diamond in the second round after both had good wins over Medway opponents in the first, while John Greenwood lost to the eventual winner.

So, in the semi-finals, Jolyon Creasey lost to Brian by 9, while Mike staged an exciting late run to pip Trevor by just 3 points.

The Sunday was a bit drier (well, less wet, perhaps) for the scheduled Best-of-3 finals for 1st/2nd and 3rd/4th. In fact, both were settled in two straight games by almost identical margins, Brian beating Mike to the title by +13, +19 while Trevor took third from Jolyon by +14, +19.

In the meantime, the remaining eight had been playing through the Consolation event, which everybody seemed to be determined not to win, such that half the field ended up on 3 wins out of 5 games – no result but some good games had!

At last some possibility of croquet, although it was still very damp underfoot, but it stayed dry and there was even some sun!

8 players turned up for the One Ball in the morning, which was won on a tie-break by Mark Houslop with 5 wins, closely followed by Kate Sander.

Kate also provided a great lunch and approximately another 8 turned up for some of this and some Golf in the afternoon, in addition to a couple of new members.

The following is a summary of the meeting: