Despite a team dropping out at the last moment, reducing the number of games from 5 to 4, a great time was had by all at Canterbury on Sunday.

The team of Jon Diamond, John Greenwood and Jeff Chapman didn’t cover themselves in a great deal of glory, although they didn’t lose all the matches, struggling with the surprisingly difficult hoops (as did many teams). Local knowledge would also have been helpful as there were some patches of grass which moved the ball off-line by several feet.

The Canterbury hosts were as generous as usual with the food and drink at lunch-time and general hospitality.

Oh, and Sussex County ran out as winners winning all their matches and only dropping the odd game. 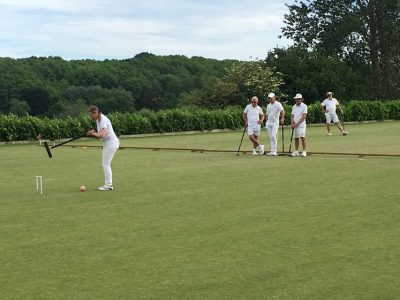