7th November – All lawns now top-dressed, so cannot be used for the Winter. Should re-open mid-March.

Delightful weather, especially on the Saturday and certainly compared to the deluge last year, saw 12 players from 8 clubs all over the country playing. This was organised as a Knock-Out, together with a Consolation Block event.

The tournament used Bryce adjustments to making 26, 22 or 18 point games depending on the strength of the players. This resulted in many interesting peg-out endings for the spectators to cheer and groan over. Mark Homan clearly regretted one of his – failing a peg-out against Jon in the Knock-Out when leading by 13 points. Sorry Mark!

In the final of the Knock-Out Jon Diamond (9 handicap from Tunbridge Wells) fairly well shut-out Owen Bryce (8 handicap from Northampton) winning by 18 points, although the 10-year old Port was some compensation for Owen.

Richard Clark, having been beaten by Jon in the Knock-Out, won the Consolation Block.

Thanks to Pegasus Retirement Homes for sponsoring the tournament, presenting the trophy and the prizes.

The Consolation Block full results are:

Mick Belcham was an exemplary manager, although one (anonymous) comment was that Care in the Community appeared to be working extremely well!

17 players all-told turned up for this Golf Croquet event. Despite the showers it was clearly enjoyed by all.

Mick Belcham and Chris Sturdy both went down to Southwick to play aganist significantly stronger opposition. Mick managed to win 3/5, but Chris had a mega-tournament. He didn’t win overall since he lost one game and so had only 4 wins. These did include Bill Arliss (1-handicap), and so he comes down with a bump from 7 to 5 handicap. Congratulations Chris!

The weather was splendid, but the lawns (despite the watering) were too fast for Jon Diamond who only won 1 of his 5 games. Perhaps he’ll manage to emulate Barney sometime in the future.
:-{

The weather continued to be kind, but unfortunately a few late cancellations meant that only eight players took part in our five-round Swiss event and John Hobbs being a playing manager. In the end the result was as close as one could wish, with Steve just pipping Jolyon on the second tie-breaker for the Honeygrove trophy: the total of their wins in hoops!

Thanks to Honeygrove Properties for sponsoring the tournament, presenting the trophy and the prizes.

The high bisquers was won by Brian Hough with four wins and his handicap now comes down to 16 (with which he is pleased). Runner up was Michael Brown (24) our country member from Sheffield! His handicap will also come down, since it was evidently too high (his garden croquet experience enabled him to hit straight!). Two players notched up 5 games in all and everyone said they enjoyed the day.

Our representative, Jon Diamond, finished second with 4 wins out of ten participants and goes through to the Finals in Colchester in two weeks time.

Miriam Reader was back to defend the title she won last year with John Hobbs, but as John was unable to play she had press-ganged Richard Clark to join her. Due to the glorious weather the lawns were rather tricky and they weren’t quite able to reproduce the previous result, having to settle for being on the losing side in the knock-out final. The other TW team of Chris Berwick and Jon Diamond ended up in fourth place, out of 16 pairs.

Visitor counter added for front page plus other committee photos and some minor changes.

Two teams of four (selected after some toing and froing and late changes) went to the SECF team handicap event held at Southwick, competing in a field of 18 from 15 clubs as far away as Sydenham and Ramsgate.

Our performance in the mornings doubles was creditably absolutely average, with both teams scoring 2 out of 4 games (including 4 drawn matches on time). The afternoon session was slightly better with Tunbridge Wells 1 scoring 6/12 and Tunbridge Wells 2 scoring 6.5/12 and finishing up 6th.

John Hobbs was at his usual best, succeeding with two jump shots and failing with one that cleared the hoop completely. He also casually ran Hoop 4 from Hoop 3! Jon Diamond managed an excellent two-ball cannon which finished up running the nearby hoop to much amusement from the spectators. Not quite what he intended, but welcome nevertheless. 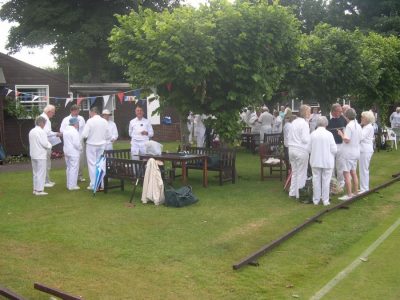 The weather co-operated, with sun most of the day (even for the prize-giving at 7pm) and no rain at all. The event was magnificently organised by Bill Arliss, with David Hopkins as Manager on the day. Winners of the Singles Event were Rottingdean and of the Doubles were Littlehampton and a good time was had by all!

8 of the Tunbridge Wells club took on a combined Sydenham/Bromley team who bravely faced the elements. At the half way stage honours were even at 4 doubles a piece. TW were just one hoop in front. As the rain increased, tea was taken early in the hope of some abatement. It was not to be. Gathering flood water across the lawns forced early abandonment. The visitors thanked us for our hospitality and vowed to return at a hopefully more favourable time.

Change detection added for front page plus club photos (including most of the committee) plus some re-organisation.

There were 16 entrants from 5 clubs (Littlehampton, Roehampton, Hayes/Bromley, Brenzett and Tunbridge Wells)

Brian Hough won his block and lost in the final Knock-Out to Eli Frith from Brenzett.

Recently three members of a department of PPP (the financial healthcare company based in Tunbridge Wells) joined the club so that, not only would they have full playing privileges, but they would be able to have colleagues from PPP as guests. Guests will be limited to weekday lunchtimes (12 – 2) and weekday evenings from 5.30, on payment of green fees. This arrangement will enable several PPP staff to have a taste of the game and to relax at lunchtime or in the evenings, playing golf croquet doubles, for the extra fun and interaction it provides. We hope that other departments will take up the idea – or other companies!