The Lawn Replacement project approved in principle – an EGM in Spring will consider more detailed proposals.

Hazel Moss-Davies was made the third Life Honarary member on her retirement from the club due to ill-health.

Despite playing late in the season, the weather was not too unkind – some sun, no rain, but a rather chilly wind from time to time. 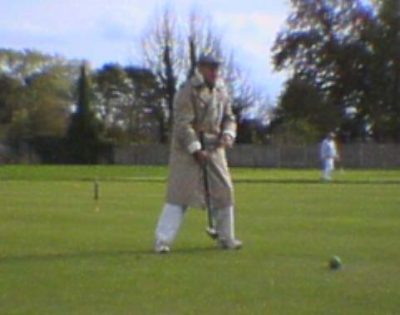 The host were as hospitable as ever and the lawns mostly true and certainly better than ours! The result of the match was in doubt until the very final game, with John Timmis (see picture) eventually pulling away from Pauline as the crowds encouraged both of them on. 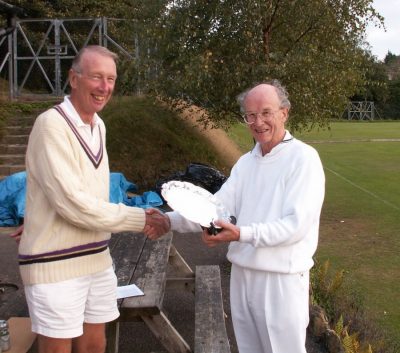 The main format was a knockout competition, leading to a best of three final between Mark Homan from Watford and Philip Mann from the Medway club. Mark won both of two very close games and received the Pegasus Plate with Philip receiving a bottle of wine.

Players knocked out of the main event entered into a ‘block’, where they played each other and the winner, Michael Hague, from Surbiton, managed the highest percentage of wins with four out of five games.

Barney Lewis just fails to qualify for the National Final, winning 2/5 games at the Regional Finals held at Compton

A disappointing entry this year of only 6. Particularly disappointing was the complete absence of Tunbridge Wells entrants for the first time since the Tournament was first run.

And then … the Ramsgate entrant was unable to attend due to injury!

And then there was 5.

Not an auspicuous start to the Club’s “premier” tournament!

However the 5 participants that did make it (2 from Norwich, 1 from Colchester, 1 from Guildford and 1 from Caterham) all appeared to enjoy themselves and fought some memorable battles.

The result: winner of the Honeygrove Cup – Jon Male of Caterham, runner up – Colin Hemmings of Colchester

The Royal Tunbridge Wells High Bisquer Tournament was established last year to give a first taste of competitive Association Croquet to beginners and those still young in the game. It attracted four local players this year (Miriam Reader, Stan Oxenbury, Mark Houslop and Mike Brown) and four contestants from Brenzett. Among the latter, Ken Huckle as a former RTW player was a familiar face, accompanied by Betty Body , Eli and Pat Frith. The day served to show that competitive play and enjoyment can go together on and off the croquet lawn.

The day proved a rarity for August with the rain keeping away, although there was a distinct autumnal start as the dew and wormcasts had to be swept clear of the lawns. The tournament took the form of ten point games played over one and a quarter hours in two blocks of four. Each player had bisques, their number calculated by deducting 14 from their handicap. The Final, between the two block winners, Eli and Mike went in Mike’s favour by 10 hoops to 3. Third place went to Stan Oxenbury.

The Manager for the day, Richard Clark promptly reduced Mike’s handicap from 22 to 18, a reward as significant for the winner as the engraved goblet presented to him. Eli took away a bottle of wine for his endeavours and a promise by his fellow club members that on return to Romney Marsh his handicap card would be reconstructed and his handicap set at 16 to reflect the unconventional but highly effective style of play that is his hallmark. In all a most enjoyable day.

A wet drive down to Eastbourne was followed by a partially sunny, but mostly showery morning, even forcing us to stop play for a few minutes twice. We didn’t quite manage to master the lawns as well as the home team as the results show.

Luckily, the weather cleared up and the afternoon, as well as the friendly games, was splendid. However, we clearly had better luck on the day than the cricketers, who’s game started at 4pm rather than 2pm, because of the wet conditions. So we didn’t get a chance to watch them free of charge when we were sitting out! All in all a good day.

One of our teams won the Doubles competition, with 3 1/2 wins out of 4. Pictured from left to right – John Hobbs, Miriam Reader, Derek Heath (captain) and Stan Oxenbury.

Bromley were captained by Eric Dennison who is of course also a member of our club. This naturally makes for a core fixture. They fielded 7 players on this occasion to the 9 of TW. Although modest in numbers theirs was a strong team and we were missing some of our crack squad. The match consisted of a blend between Association & Golf. Insofar as a result is possible to call, Bromley definitely took the honours on the day. We shall be visiting them on 12 Aug and are resolved to set matters straight.

Crawley were captained by Len Nash and included Betty Woodhams, Malcolm Roberts and Cecil Henman. TW fielded Colin Mabey, Roger Morris, Ray Meech and Frank Gunstone. A keenly contested game provided a closer result than the overall score of 7-2 to TW would suggest. The match was carried out in a very good spirit – no surprise at all. We were however glad to bag the spoils in our very first encounter ever in the Federation Golf Tournament.

Our first match in the new 7 game format was successful! The day was fine and dry, with a little sun and not too warm. Our opponents took a little time to get to grips with our much slower lawns, winning 2/4 of the afternoon games, but we ran out winners having won all the morning ones.

As usual this was a popular fixture and “TW” probably won although the result was complicated by player switches, even representing the opposition when necessary. This is a tested formula and worked well. We were fortunate to have a real summers day and a full house – 12 a side.

Roger Morris is organising a visit to play on their lawn on 18th June, commencing at 11am. We will be taking our equipment (a packed lunch is optional). Please contact him if you want to be part of the party. 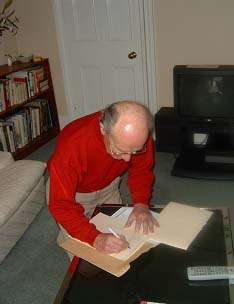 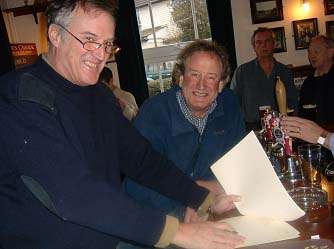 Signing the lease (at last!)