11 people attending our first one of the Winter. We’re running a competition throughout the Winter (highest percentage with a minimum of 5 games), so please sign up and write the results of your games on the sheet.

Our Golf Ladder has now closed and there are four players who have played five or more games.

The winner with 4 wins from 5 games is Shirley Jones, with the other players being Duncan Cox 5/8, Bob Bruce 4/8 and Sandy Smith 4/9.

Our first pub lunch of the winter was a record: with 25 people attening – more than 50% of our membership! It was good fun too.

We’ve come first in the Golf Restricted League, 4th and 10th in the Handicap League (East), 3rd in the U League and bottom in the A League.

We managed to stage just two finals this year on Finals Day – must try harder….

In the Lustau Richard Mann was in stonking form, going round without using any of his bisques, so ran out an easy winner against Jon Diamond +17.

After the Kitching Rose Bowl semi-final in the morning between Derek Crocombe and Jeff Chapman, Jeff beat Ray Meech 7-2, 7-6 in the afternoon rain.

Ten players, with handicaps from one to seven, played five rounds of a Swiss in our Autumn Advanced tournament. At the start of the fifth round there were four players with three wins, including Jon Diamond and Jolyon Creasey. But although Jon won his game he was the runner up, because the other player with four wins, Paul Miles from Medway, had earlier beaten Jon. The heavens opened just as the last game finished, so ending the tournament on a suitable note…

The final table is:

The first of our internal competitions was played today, with Jon and Sandy running out winners over John Hobbs & Kate Sander 7-2, 7-6. Congratulations to them.

Richard Mann and two other were equal third, out of 8 players. Chris Barham was in contention at the end of the first day but “fell away” in the second.

The format of 18 point games, 2 1/4 hour time limit and working from a handicap base of lowest handicap person (Mick Belcham on 4) …. voted a success.

Our team 2 won all four of the doubles matches, so winning the trophy out of 22 teams – Duncan Cox and John Moore beat Guilford & Godalming (1) 7-3 and Angmering 5-4 (out of time), whilst Derek Crocombe and Sandy Smith beat Rother Valley 4-2 (out of time) and Reigate Priory 7-4. This was a good introduction to competitive play for Sandy and her confidence grew as the day went on!

The trophy is in the club house for you all to see. 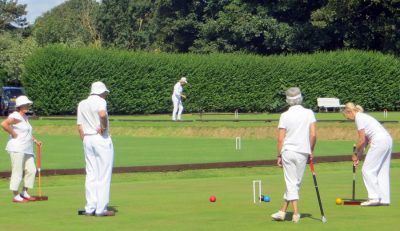 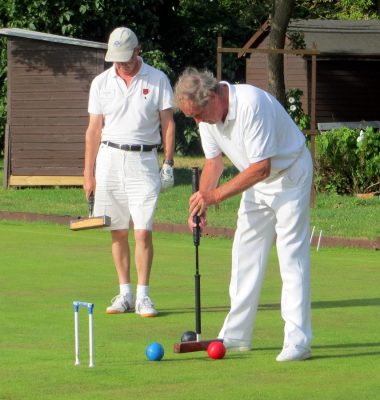 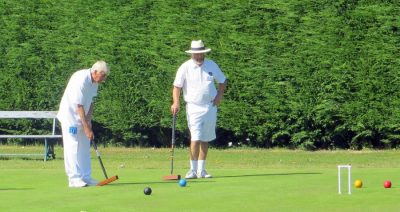 The photos are copyright Derek Heath.

For the first time we had a significant presence in this annual event held in Ramsgate, with 4 players – Derek Crocombe, Frank Gunstone, Derek Heath and John Skates.

In a very tough tournament, dominated by the English internationals with handicaps 0 and 1 from Ramsgate, Derek Crocombe did very well, coming 4th. Congratulations to him!

10 teams from the South and South East Federations competed in this challenging Golf Croquet event. Our noble team were unable to repeat our performance of last year’s event, when we came fourth, as this year we had a slightly weaker team due to illness and holidays. In fact having lost the first 5 games we were extremely lucky not to finish in the bottom two and risk relegation to Division 2!

The Southwick lawns for this event were fast and uneven, so making it more of a challenge than some of the team desired and we were up against some tough teams, since this was a level play event. [Merton were a surprise with a team consisting of handicap 3 and 4 players.]

Dulwich won again (no surprise there), with Ramsgate the runners-up.

There were a mixture of Singles and Doubles for each player and the Singles results were:

The Montevideo Cup is our one day Golf Croquet tournament. A full complement of 12 players enjoyed(?) the gales and lively showers of TW. 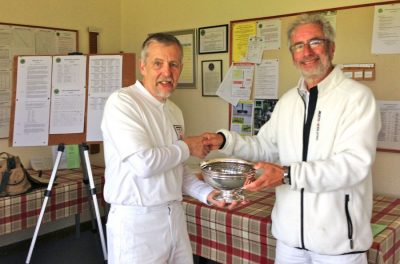 Richard Brooks had returned to defend his trophy, but lost decisively in the final (10-4 in a 19-point game) to David Thirtle-Watts from Hunstanton, who got his handicap reduced from 4 to 3 as a result.

Block results are:
Block A

Yet again our stalwarts have failed to get our club’s name on the Kent Cup!

Robert Alexander from Medway defended his title successfully, this time defeating Jolyon Creasey by two games to one in the best of three final on home turf.

Our other players were Jon Diamond, Mick Belcham and John Hobbs, with Mick Greagsby being hors de combat because of his shoulder.

Our lawns were extremely slow, which contributed to the poor play. Sadly, there’s not much we can do this season to improve things, except hope that the ground dries up a bit more…

We’ve been successful with some grant applications with the Gatwick Airport Community trust and Kent County Council, so we’re

Opening day started soggy and very damp – there were many calls in advance to see if we were still going to play, since there had been more than an inch of rain in the last few days. After a short delay it was decided that Lawn 1 was just about playable, but the other weren’t, so our One Ball was going to be a bit tricky to organise!

14 players turned up for the CA Charity event and everyone envied Barney’s sailing wellies on this occasion, since we all got very wet feet. Despite the late start and the mess caused by having 4 games going on at the same time (Mike Sander: please watch where you’ve going to hit a ball to as there might be other players already there…) Kate Sander managed to play and win four games and therefore gets the privilege of going to Winchester for the UK final of this event. John Skates also won 4 games, but lost his last one to Kate. We raised £115 for the Marie Curie charity – thanks to everyone who played.

The sun came out in the afternoon, so that the late comers could enjoy the play and the warmth (has spring arrived at last?) and even play some Golf after the tasty lunch provided by Kate (thanks).

John Moore wins the One Ball event which ran over the winter period with 5 wins out of 6 games, closely followed by Barney Lewis with 7/9, Ray Meech with 4/6 and Michael Sander with 5/8.

Although the AGM voted against moving the Wednesday club afternoon to Thursday, we’ve decided to add a Thursday late pm session from 18th April, primarily aimed at people playing One Ball or Association.

As part of this we’re introducing regular coaching sessions, starting at 4pm, during April and May at least, led by Jolyon Creasey.

The full AGM minutes can be accessed here, but the following is a summary of the meeting: