The full SECF league results have been announced and confirms our disappointing year, apart from our performance in the A league.

Must do better next year…

A glorious Indian Summer day brought almost all the finalists together for a super Finals Day. Everything went to schedule and a great lunch and tea provided by Kate Sander (thanks Kate) went down really well. We even had a few spectators enjoying the weather as well as the play… 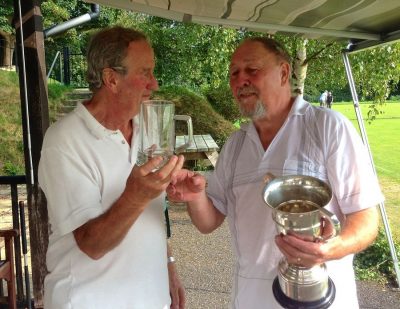 A last minute drop-out due to back problems meant that only 7 players, with handicaps from 1.5 to 5, took part this year. Mick Belcham, as manager, played a blinder and managed to achieve an all-play-all event without any problems or people sitting out for a long time and ensuring it finished about 4pm on the Sunday!

Our own Alex Jardine achieved a clean sweep, so deciding the winner was a no-brainer.

The final table is:

The Pegasus Plate is our regular Association Croquet Handicap weekend tournament and this year we had a full turn-out with 12 players from as far apart as Colchester and Brighton. (Oxford University doesn’t count as Martin is also a member of TW as his parents live here.)

Saturday’s weather was bright and mostly sunny, if a little breezy towards the end of a long day of three untimed games, with strange bisque rules (Yorkshire?). However, Sunday produced the tail-end of Hurricane Bertha. We started playing quite happily with a little drizzle, but a sudden thunderstorm and heavy gusts of rain at about 11am sent most people scurrying for the clubhouse. 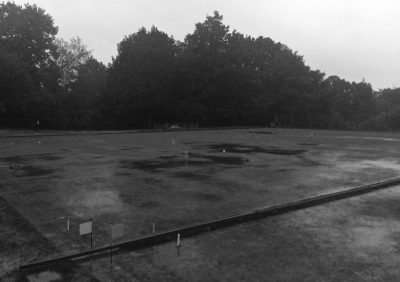 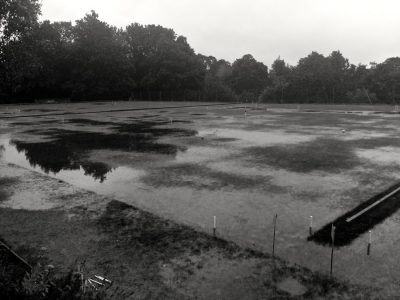 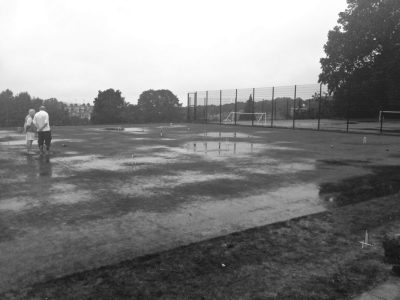 After a wait of the best part of an hour the puddles were heavy on all three lawns and it was still raining (see pics right). The weather forecast was for rain for the next couple of hours and it was decided to abandon play, since it would take at least an hour for the lawns to recover to a playable state when it stopped raining… 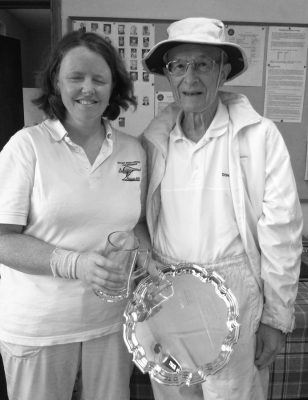 This left John Hobbs with a decision as to how to award the trophy, since both Susan and Richard Lea had won all three games played and hadn’t finished their fourth round game. So, on the basis of net hoops, Susan was declared the winner. Hopefully she’ll bring her much stronger half next year, Robert who is an ex-World Champion, but I have my doubts!

Our team of John Moore, Jeff Chapman, Kate and Michael Sander performed nobly, but came up a bit short in the Singles event – finishing 15th out of 18 teams with 4 wins out of 12 games. They did much better in the Doubles, winning all four matches; however they lost out on tie-break to Cheam who got 12 points to our 11; shame…

Our internal competition for the All England Handicap event was run as an all play all event, using 18-point games with a 2 hour time limit.

The final order was:

The Montevideo Cup is our one day Golf Croquet tournament. A full complement of 12 players enjoyed the weather, although a lively shower sent them off the lawn for 5 minutes.

Richard Brooks returned again to try and regain his trophy, but didn’t qualify from his block for the semi-finals and David Thirtle-Watts was unable to defend his title from last year. The final was a 19-point game, with Tudor running out an easy winner 10-3 against Ian Cobbold.

Martin Lester, who’s a member of our club when not studying at Oxford University, won his first tournament and a reduction in his handicap to 8!

For the second year in a row we held the Association Kent Cup at Tunbridge Wells with just a select total of 6 players, down on last year due to illness etc.

Our only home player, Jon Diamond, didn’t quite come up to scratch and Robert Alexander, clearly the best player, retained his title for the umpteenth year! I’m sure that there will be a year sometime soon when a Tunbridge Wells player will win…

For the first time in living memory there was a player from East Kent: Tobi Savage, who’s a member at Canterbury and Ramsgate, performed extremely well in his first AC tournament – he’s one of the top players in the GC world.

The first match in our Golf Teams League was a draw – Frank’s Fancies v Brian’s Bullion.

Opening day was soggy and damp, but not as damp as in 2013! Still, the cold and drizzle and lack of Kate Sander’s splendid lunch did reduce the participation to a total of 8.

The CA Charity event was decided by a select bunch, including an itinerant Aussie currently serving in Kabul, but in TW for the rest of this month, whilst his girl friend delivers their first child. Unsurprisingly, or perhaps so, Derek Crocombe ran out an easy winner – of all his gamea, so will have the pleasure of going to Winchester for the final.

Bob Bruce has kindly volunteered to be Secretary to the Club.

Our Winter Pub Lunch programme has now finished with 11 people at the Bottle House, despite attempts from the Kent County Council Highways to prevent us getting there. At the peak we had multiple tables at the Nevill Crest & Gun with 25 attendees, so thanks to Mike Gentry for organising us all.

The full AGM minutes can be accessed here, but the following is a summary of the meeting: