A glorious day dawned on a Sunday early in September, so it must be Finals Day!

This year three finals of our competitions were played and there were more spectators than players – the first for a long time. We almost ran out of chairs… 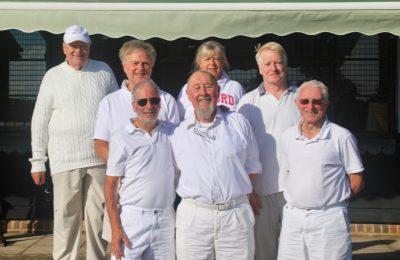 The first game to finish was the Lustau Cup (Advanced Handicap) with Alex and Jon contesting. Since Alex has recently beaten Jon twice in level play it was thought that with Alex receiving bisques this should have been a walk-over. In fact it wasn’t quite.

After a few skirmishes Alex took his first ball round to Rover using one bisque, giving a Contact. Although Jon didn’t get going from this he did a little later and retaliated by going to Rover too (he should have pegged Alex out though).

After some more errors Jon got going again, but failed hoop 3, so Alex had the break and went round but missed the peg-out! Jon hit in but couldn’t get going properly and eventually ran hoop 4, but couldn’t hit his partner ball, missed Alex’s in the middle of the lawn so Alex won.

On the day that Alistair Cook played his final test innings Richard Clark played his final competitive game in the Kitching Rose Bowl, watched by Brian Kitching. At 84 he’s been struggling a bit this summer, so couldn’t quite keep up with the youngster (?) Mark, running hoops is quite necessary, and lost in two straight games

The final game was, as predicted a tight one and almost went to time (3 hours), as most of our high handicap Association Doubles do. John G & Jane seemed to be slightly ahead for most of the time, but it was still close as both John G’s and Jolyon’s ball were for Peg, Jane’s for Penult and John M’s for 2-back.

After a further bit of toing and froing John had made two more hoops, but Jane had done so also and eventually with John G lining it up made the peg-out – phew! Miriam Reader would have been proud.

Full results for the year can be seen here.

Thanks to Kate Sander for providing the excellent cakes in absentia.

In addition, as time for the competition has run out, Jane Smith won the Howell Cup (Association High Bisquers).