At the end of the first day our two players were doing really well, with Jon on 3 out of 4 wins, having lost only to Alex (who was also Manager of the event) and who had 3 straight wins. However, this didn’t quite continue on to the second day.

Perhaps Ray’s mowing of the lawns a bit lower on Sunday morning, making them faster, had disturbed things a bit for us because we failed to maintain the momentum with both Alex and Jon losing another game.

In the exciting final turn of the game finishing after “time” on the Sunday, Andy Dibben came from a point behind to peg out, thus beating Phil Dunk and taking him to 5 wins out of 6.  This gave Andy the trophy on percentage wins, ahead of Andrew Dutton and Alex, waiting hopefully on 4/5.

This 13-player flexible Swiss was played in excellent weather, without time-limits till the final hour; the narrow handicap range (0 to 3) making for competitive play and plenty of upsets.

The prize for effort (bottle) went to Chris O’Byrne for his eight games (!) and, after reaching the trigger on several previous occasions but each time slipping back, Jon Diamond at last hung on to get his handicap down to Scratch. 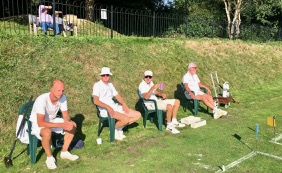 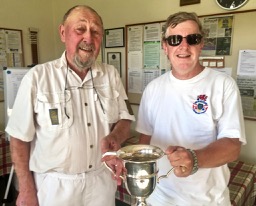