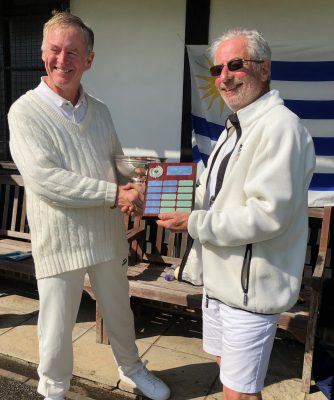 Jonathan Lamb presented us with this Cup when he won it for the first time (he’s been a long-time resident in Uruguay which is why the cup has that name, but is now in Canterbury for much of the year). This year this GC level play cup was held on Saturday 11th May, with the strongest participation ever, and he beat Chris O’Byrne from Reigate Priory in the final, despite the occasional heavy rain shower and hail storm.

The other fancied low handicap players all stumbled in their blocks, but the highest handicapped player, Ben Harwood (the groundsman at Southwick) did stonkingly well and had his handicap reduced from 4 to 2.