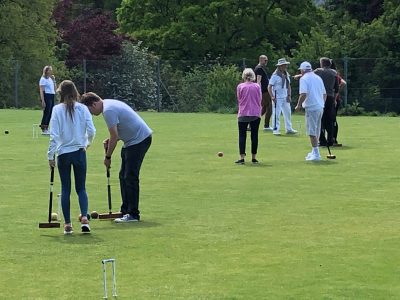 We were blessed with a bright sunny day with a temperature of around 15C and a good turnout from existing Club Members to support as Volunteers.

Five decided to join after playing and 4 more couples expressed strong interest to join after their positive experience and we have some more who are proposing to join our Croquet Introduction Course days that are still to be held in June, July and August after a successful May event, where we obtained two new members.

We had generous donations from our visitors giving £41 for Parkinson’s UK.

This year we had a banner made and we have had it up on our fencing for six weeks which generated a reasonable interest level as evidenced from the questions asked in the website link that was on the banner. A suggestion made by a visitor, to have a second banner at the bottom of Calverley Park, will be adopted for next year, also for the WCF Simon Carter Golf Croquet World Championship that we are are co-hosting.

We are also a member of Nextdoor, an international social media platform that is built around neighbourhoods. Tunbridge Wells has approx. 4800 households on Nextdoor, which we used twice for NCD and is being used for our other events this year.