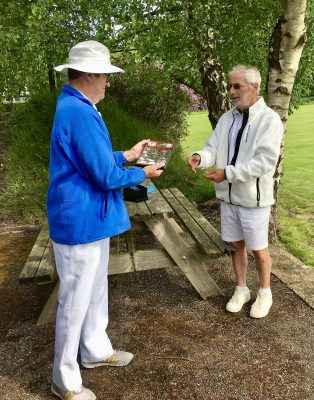 Another lovely day welcomed eight players from three clubs in the Montevideo Cup, being held again after a three year interval. This is somewhat down on the 12 we’ve had in previous years, but seems in line with what’s happening elsewhere.

Nevertheless everybody enjoyed the day, especially those new to tournament play, with the lawns playing excellently, although a little slower than at some other clubs (as usual).

Richard Brooks ran out the winner with an unblemished record, not even being forced to hoop 13 in any game. This constitutes his third win in this tournament – it doesn’t mean he keeps the trophy if we can find it!

Special mention to Dan Crocombe winning three games and also to Denis Cruse whose handicap was reduced from 10 to 8.